Calling all girls from Southwestern Pennsylvania entering 9th-12th grade! Applications are now open for GirlGov 2016! Go to GirlGov.org to apply by April 29th.
In the News:
Harriet Tubman to replace Andrew Jackson on $20 bill:

Treasury Secretary Jacob J. Lew announced last week that Harriet Tubman would replace Jackson on the front of the $20 bill, becoming the first woman in more than a century and first African American to grace the front of a paper note. Tubman was a self-emancipated slave who led hundreds of other slaves to freedom on the Underground Railroad, and is widely remembered as a revolutionary. Though Treasury officials had initially planned to feature a woman on the $10 bill, outrage from historians and fans of the Broadway hit musical “Hamilton” secured the position of its current occupant, Alexander Hamilton. However, the Treasury Department will replace a picture of the Treasury building on the back of the $10 with leaders of the suffrage movement — Sojourner Truth, Susan B. Anthony, Elizabeth Cady Stanton, Alice Paul and Lucretia Mott. For more: LA Times
Bolivian women scale mountains in traditional dress:

Stunning new footage shows a team of about 15 indigenous Aymara women from Bolivia testing themselves by scaling some of South America’s highest mountains, all while wearing traditional cholita paceñas dress. The women, between 42 and 50 years old, are the wives of mountain guides but had no formal experience in climbing outside of cooking and cleaning for mountaineers at local base camps. Determined to see the views from above for themselves, the women decided to set out in their layered colorful dresses, Andean “aguayo” shawls, and knitted cardigans. They have now successfully scaled the mountains of Parinacota (20,826 feet), Pomarape (20,610 feet), Huayna Potosi (19,973 feet) and Illimani (21,122 feet). For more: RT
Saudi women may soon gain the right to drive: A former senior U.S. military officer told a news outlet that crown prince Mohammed bin Salman, son of the Saudi king Salman, is ready to grant women the right to drive, and said he heard the prince saying, “If women were allowed to ride camels [in the time of the Prophet Muhammad], perhaps we should let them drive cars, the modern-day camels. The prince told Bloomberg separately that he recognized that half of the country is made up of women and wants that half to be productive members of society. He also criticized those who “distort the facts of the religious establishment so that women don’t get their complete rights granted them by Islam.” He went on to say, “We believe women have rights in Islam that they’ve yet to obtain.” For more: Bloomberg
Dipa Karmakar becomes first female Indian gymnast to qualify for Olympics:

This week, Dipa Karmakar became the first female Indian gymnast ever to qualify for the Olympic games. The 22-year old, who is one of only five gymnasts to have successfully executed the “Produnova vault,” will compete in artistic gymnastics at this year’s Rio Olympics. Her qualification also marks the first time in 52 years that India will be able to send a gymnast to the Olympic Games. For more: BBC

Election Updates:
Ted Cruz and John Kasich form alliance to slow Trump momentum: Republican presidential candidates Ted Cruz and John Kasich agreed to cede upcoming primary contests to each other in a measure of last resort to prevent the nomination of Donald Trump, which seems increasingly inevitable. Mr. Kasich would, most crucially, stand down in Indiana’s primary on May 3 to give Mr. Cruz a better chance to defeat Mr. Trump there, while Mr. Cruz would leave Oregon and New Mexico to Mr. Kasich. However, the pact is already showing signs of weakness as the two candidates continue to disparage one another’s chances at becoming the nominee. For more: New York Times
Five more states head to the polls on April 26: Pennsylvania, Maryland, Delaware, Rhode Island, and Connecticut will vote today in the “Acela primary.” Most analysts are predicting a solid win for Donald Trump in the Republican camp, and believe that a good showing for Hillary Clinton could allow her to virtually clinch the Democratic nomination. For more: NPR
Feminist of the Week: 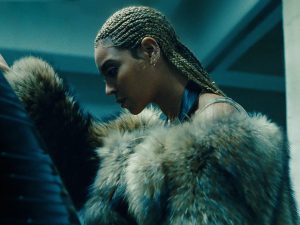 This week, Beyoncé dropped her album and hour-long video feature Lemonade. Though the music and style might not suit every listener’s taste, there is no doubt the visual album gives women — and black women in particular — a degree of representation that is uncommon in the music industry, and in media generally. NPR reporter Kiana Fitzgerald notes: “With this album, Beyoncé is telling us that she’s made it this far in spite of the system in place; you know — the overtly sexist, subtly racist one. She was served lemons. And she made the most fire, refreshing, delectable, thirst-quenching lemonade ever known to man. Actually, scratch that — ever known to woman.” For more: Elle