Feb. 23, 6 pm: The Raizman Lecture featuring Jenny Nordberg
The Women’s Institute at Chatham University presents the Raizman Lecture featuring Jenny Nordberg, author of “The Underground Girls of Kabul: In Search of a Hidden Resistance in Afghanistan.”
In Afghanistan, where society is ruled almost entirely by men, the birth of a son is cause for celebration and the arrival of a daughter is often mourned as a failure. But there is a third kind of child – girls raised as boys – using gender to resist the Taliban. Jenny Nordberg, the award-winning journalist, author, and TV producer who broke this story for The New York Times, will speak about Afghan women and girls living with almost no rights and little freedom, but using gender as a form of cultural resistance.

Don’t miss this chance to hear her speak! There will be plenty of time for Q&A and book signing as well. The event is free and open to the public with registration. For tickets, visit chatham.edu/events. 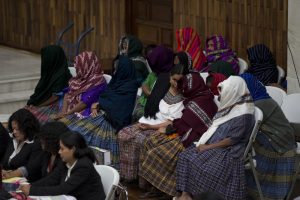 Last week, a historic trial began in Guatemala. It’s believed to be the first time any national court has held a trial to prosecute sex slavery during an armed conflict. Two former military officers stand accused of murder, kidnapping and keeping nearly a dozen indigenous women as domestic laborers and sex slaves during the country’s 36-year civil war. The women accusers are in their 70s and 80s and speak Q’eqchi’, a Mayan language. They have spent almost their entire lives in situations of extreme poverty and have health implications from that violence that has not been dealt with because they have not had access to medical care. Many of the women fear that similar abuse could happen again, and hope that the trial will force Guatemala to reckon with its past and prevent proliferation of sex slavery during war in the future. For more: NPR
Study finds rise in number of female protagonists in Hollywood: 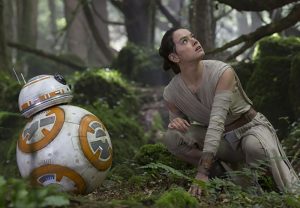 According to a new study by the Center for the Study of Women in Television and Film at San Diego State University, female leads made up 22 percent of high-grossing films in 2016 — up 6 percent from 2014 –  while 34 percent of major characters were women.  However, the majority of these increases are for white female characters. The study’s author, Martha Lauzen, sees these “numbers moving in the right direction,” but says she’s unsure “whether or not 2015 was a bit of an anomaly or whether this is the beginning of a longer-term trend.” For more: New York Times
Boko Haram uses women as suicide bombers in Nigeria: Nigeria continues to be vexed by the utilization of women and girls as suicide bombers for the purposes of the terrorist organization Boko Haram. The United Nations estimates that since June 2014, Boko Haram has deployed 100 abducted women and girls for attacks once carried out by men. The group has also used boys as young as 8 for suicide missions, and the attacks have resulted in hundreds of deaths. Many experts on Boko Haram say the women and girls who are deployed have been brainwashed or are simply unaware that the devices they are carrying can kill them. For more: New York Times
New website allows women to review companies’ policies: Fairygodboss is a new website aimed at allowing female employees to rate and review their employers’ policies towards women, and has drawn close to 20,000 reviews in the first years of its existence. Check it out here: Fairygodboss.com
Iranians speak out over sexual harassment scandal:

The decision by Iranian newscaster Sheena Shirani to publicly claim she was sexually harassed by coworkers at Press TV has encouraged other women in similar situations to come forward. Many Iranian women have expressed that they now feel empowered to share their experiences of a problem traditionally not acknowledged inside the county. For more: BBC


Election Updates:
Supreme Court justice, Antonin Scalia, dies at 79: Justice Antonin Scalia, whose transformative legal theories, vivid writing, and outsize personality made him a leader of a “conservative intellectual renaissance” in his three decades on the Supreme Court, was found dead on Saturday at a resort in West Texas. His passing will certainly make the election year of 2016 more interesting — GOP Senate Majority Leader Mitch McConnell announced Saturday night that the Supreme Court vacancy “should not be filled until we have a new president,” while President Obama asserted he plans to appoint a justice in a timely manner in accordance with his constitutional responsibilities. The justice’s death will also pass a long shadow on the fight for control of the Senate, as the confirmation of a new appointee will surely affect many political and social issues in the years to come. For more: Politico
Republican debate highlights: During Saturday’s GOP debate in Greenville, SC, all candidates sided with Republican congressional representatives who claimed that the newly vacant Supreme Court seat should be filled by the winner of the 2016 election rather than President Obama. Donald Trump and Jeb Bush sparred early on about George W. Bush’s policy decisions around 9/11; Senators Marco Rubio and Ted Cruz viciously attacked one another about immigration, ethics, and one another’s Spanish-speaking ability; and Ohio Governor John Kasich continued his attempt to paint himself as a credible “establishment” candidate. For more: NPR
Note: Carly Fiorina and Chris Christie suspended their campaigns following poor showings in last week’s New Hampshire primary.
Democratic debate highlights: The sixth Democratic debate in Wisconsin presented an opportunity for Hillary Clinton and Bernie Sanders to focus all their attention on one another following Sanders’s landslide win in the New Hampshire primary and Martin O’Malley’s exit from the race. Sanders veered into new territory with a critique of Clinton’s friendship with Henry Kissinger. The debate included familiar arguments about Wall Street, wages, health care, and pragmatism. For more: NPR 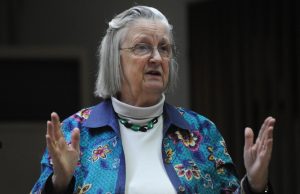 A group of female political scientists have teamed up to create Women Also Know Stuff, a website intended to provide an easily accessible database of female experts in a variety of fields. The project began when members of the group noticed media reports on politics very rarely cited female experts. Although men with doctorates, and in faculty positions, outnumber women significantly — women hold 28.6 percent of full-time faculty positions in political science —  these differences weren’t enough to account for underrepresentation of women scholars in the public sphere. The site already has hundreds of submissions and thousands of views. Pictured: Elinor Ostrom, 2009 winner of the Nobel Prize in Economics. For more: Washington Post