In the News:
Two generals say women should be required to register for the draft: In the days since the Pentagon opened all military roles to women, senior military leaders Gen. Robert B. Neller and Gen. Mark A. Milley proposed that women should be required to register for the draft. The move would be largely symbolic, since the draft has not been used since the Vietnam War. Senator Claire McCaskill noted: “asking women to register as we ask men to register would maybe possibly open up more recruits as women began to think about, well, the military is an option for me.” Defense Secretary Ashton B. Carter and the White House have yet to announce official positions on the issue. For more: New York Times
Women’s rights groups petition Brazilian government following Zika outbreak:

The apparent relationship between the Zika virus pandemic and a rising number of cases of the birth defect microcephaly is pushing Brazilian women to resort to abortions. However, most types of abortions are illegal in Brazil and many other Latin American countries which have been affected by the Zika virus. The nonprofit advocacy organization Anis: Institute of Bioethics, Human Rights and Gender is one of several groups collaborating on a petition to Brazil’s Supreme Court to loosen restrictions on abortion. The group is asking for a bundle of broad public policy actions related to reproductive health; access to contraceptive methods; early, safe diagnoses for microcephaly; improved prenatal care; the right to an abortion in the event of a positive diagnosis; and infant support for women who have already given birth to babies with microcephaly. For more: Huffington Post
Syria peace talks to include women representatives: Twelve representatives from Syrian women’s organizations have been invited to participate in peace talks as part of a Women’s Advisory Board in order to include more “ground-level” perspectives on the brutal five-year war. Melissa G. Dalton, a fellow at the Center for Strategic and International Studies, said “women are on the front lines…Bringing those voices to the table might strengthen the imperative to deal with the humanitarian concerns as well as military and diplomatic concerns.” Many believe the advisory committee is a good first step, but that women should be included among top leadership of the negotiating teams. For more: New York Times
Monica Lewinsky develops new way to combat cyberbullying:

Monica Lewinsky, who knows all too well the tribulations of public shaming, is rolling out a new strategy to help people cope with the excruciating experience of being bullied and shamed online. Her latest project, developed in conjunction with wireless carrier Vodafone, is a series of new emojis that are designed to allow people to show support for someone going through an online bullying experience. Lewinsky expressed concern with the level of misogyny that turns up in so much online harassment, and sees the emojis as a first step in changing the culture. For more: Recode

Diagnoses of ADHD on the rise for girls and women: According to a study published in The Journal of Clinical Psychiatry, diagnoses of attention deficit hyperactivity disorder (ADHD) have shot up 55 percent for girls, and 40 percent for boys, between 2003 and 2011. In women aged 26 to 34, ADHD prescriptions have increased 85 percent between 2008 and 2012. For more: Yahoo
UNICEF releases new data about female genital mutilation: a new statistical analysis by UNICEF calculates that at least 200 million girls and women today have undergone some form of female genital mutilation. Though these new estimates are staggering, they represent the effectiveness of international pressure to force governments to collect current data and take the issue seriously. For more: NPR


Election Updates:
Rubio and Christie face off in Republican debate: Following a spectacle of confused entrances and rhetorical back-and-forth typical of prior Republican debates, candidates Marco Rubio and Chris Christie clashed several times during Saturday’s debate. Christie continued to interrupt Rubio throughout the night and criticized him for deploying a “memorized, 25-second speech.” Rubio defended himself to media outlets later, standing by the speech in which he repeated multiple times, verbatim: “Let’s dispel this notion that Barack Obama doesn’t know what he’s doing; he knows exactly what he’s doing.” For more: NPR
New Hampshire primary quirk could lead to more delegates for Trump: Because of a quirk in how the state party allocates delegates and how fractured the “establishment” field is, an anti-Trump vote cast in today’s New Hampshire primary could actually be a vote for the New York billionaire. Read more for the complete explanation: NPR
Feminist icons scold millennial women for backing Sanders: 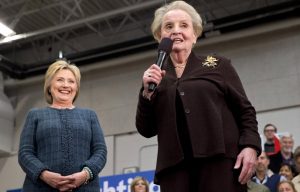 While introducing Hillary Clinton at a rally last week, Madeleine Albright, the first female Secretary of State, incorporated several digs at young women who favor Bernie Sanders’s “revolution” over the “revolutionary” possibility of electing a female President. “We can tell our story of how we climbed the ladder, and a lot of you younger women think it’s done,” Ms. Albright said. “It’s not done. There’s a special place in hell for women who don’t help each other!”
During an interview with talk show host Bill Maher, famous feminist Gloria Steinem, 81, suggested that millennial women were supporting Bernie Sanders to meet young men. “When you’re young, you’re thinking: ‘Where are the boys? The boys are with Bernie,’ ” Ms. Steinem said. She later issued an apology for insinuating that young women are not serious in their politics, stating that “whether they gravitate to Bernie or Hillary, young women are activist and feminist in greater numbers than ever before.” Both Albright and Steinem have received considerable backlash for their remarks. For more: New York Times

For the last five years, more than 1,000 nuns of the group Talitha Kum have been going undercover as sex workers to help women trafficked into prostitution and sex slavery. The sisters run prevention programs in schools to keep young people out of the hands of traffickers. They also provide safe haven to victims in convents and the homes of sisters, and they pose as sex workers to help women out of trafficking rings and to purchase children who are being sold into slavery. The group will be expanding its work from 80 to 140 countries due to the rising global demand to end human trafficking and slavery. In an interview, feminist nun Sister Simone Campbell explained, “It’s important to recognize that the sisters [of Talitha Kum] do a very specific type of ministry. Our charge is to walk with the people, understand the needs of our communities and compassionately respond.” For more: Ms. Magazine