In the News:
First woman commadant of cadets sworn in at USMA: Brigadier General Diana Holland made history on January 5th when she became the first woman commandant of cadets at the U.S. Military Academy at West Point (USMA). “I am very honored to be named the next Commandant of the U.S. Corps of Cadets,” Holland said in a statement. “It’s a privilege to be part of the team that trains and develops leaders of character for our Army.” Holland will now be responsible for the development of cadets into Army officers. She was previously the first woman general of the U.S. Army Fort Drum & 10th Mountain Division.
Obama vetoes bill that would defund Planned Parenthood and repeal ACA: The House of Representatives voted 240-181 in favor of a measure to defund Planned Parenthood for one year and repeal key provisions in the Affordable Care Act. President Obama vetoed the bill, saying that it would “reverse the significant progress we have made in improving healthcare in America.” Wednesday’s vote is the 11th time anti-women’s health politicians have tried to defund Planned Parenthood during this Congress. For more: New York Times
New NY law permits pregnant women to enroll in health care plans: New York Governor Andrew Cuomo signed a bill into law on December 22 which will allow pregnant women to gain access to health care at any time, eliminating the previous requirement that they wait for open enrollment periods to purchase health insurance. According to a 2015 report released by New York City Comptroller Scott Stringer, including pregnancy as a qualifying event will result in greater access to prenatal care, which should strengthen public health and potentially lead to long-term cost benefits to both individuals and New York’s health care system. For more: PBS
Emma Watson creates feminist book club: Harry Potter actor, UN ambassador, and feminism campaigner Emma Watson announced on Twitter that she is stating a feminist book group called “Our Shared Shelf.” The announcement by Watson, who is a goodwill ambassador for UN Women and a figurehead for the gender equality campaign HeforShe, sparked a flurry of responses. Following the suggestion of retired American footballer Abby Wambach, Watson elected Gloria Steinem’s latest memoir, My Life on the Road, for month one. To join the group “Our Shared Shelf”: Goodreads

Election Updates:
Sanders bests Clinton in new early state polls: The intensifying rivalry between Democratic candidates Hillary Clinton and Bernie Sanders spiked a few degrees on Tuesday with the Monmouth University survey and the Quinnipac poll showing the Vermont senator on the rise. The latest surveys show Sanders catching fire in not only his regional stomping ground of New Hampshire but also in Iowa, where Clinton enjoyed a double-digit lead as late as mid-December. For more: Politico (NH), Politico (IA)
White nationalist group urges Iowans to vote for Trump: A white nationalist super PAC says it has started an independent robocall campaign in Iowa urging voters to support Donald Trump’s presidential bid. The campaign is being funded by the American National Super PAC, which was created by the chairman of the American Freedom Party, William Johnson. A spokesperson for the Trump campaign did not immediately respond to a CNN request for a statement on the robocall campaign. For more: CNN 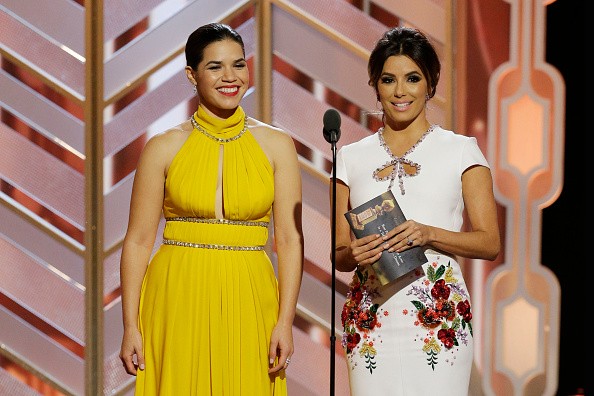 During the 2016 Golden Globes on Sunday night, America Ferrera and Eva Longoria called out those who apparently have a difficult time distinguishing Latina actresses from one another. Last month, the Golden Globes made a Twitter gaffe that went viral when the award show’s official account mistook Ferrera for Jane the Virgin star Gina Rodriguez. Their humorous quips highlighted one of the many frustrations Latina actresses routinely experience. Watch the video here: Entertainment Tonight