In the News:
Taiwan elects its first woman president: 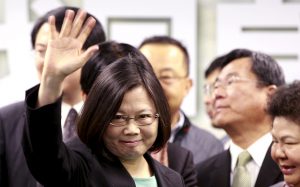 On Saturday, Taiwan elected Tsai Ing-wen as its first female president. As the Democratic People’s Party (DPP) comes to power with her, it displaced the majority Kuomintang (KMT) — the first time they have controlled parliament since the founding of the country in 1949. “The results today tell me the people want to see a government that is willing to listen to people, that is more transparent and accountable and a government that is more capable of leading us past our current challenges and taking care of those in need,” Tsai told reporters after declaring victory. She has expressed support for marriage equality, has fought for workplace equality and participation of women in politics, and represents a moderate view on China. For more: New York Times
Study suggests doula support for pregnant women could reduce costs: A study published online Thursday by the journal Birth suggests that offering women the support of a certified doula could save Medicaid and perhaps private insurers real money — nearly $1,000 a birth — by reducing cesarean and preterm births. Lead author Katy Kozhimannil, an associate professor in the University of Minnesota School of Public Health, described the barriers to access as “financial, cultural and geographic,” and noted that “the financial barrier ought to be the first to fall.” For more: NPR
Women of NASA’s first gender-balanced astronaut class considered for Mars mission: The women who comprised fifty percent of NASA’s astronaut class of 2013 might be headed to Mars. Handpicked from over 6,000 applicants, astronauts Christina M. Hammock, Nicole Aunapu Mann, Anne C. McClain, and Jessica U. Meir completed two years of intense training, mastering skills like T-38 supersonic jet piloting, negotiating tasks while submerged in deep water, and enduring rides in the “vomit comet,” an aircraft that simulates weightlessness via free fall. The women will now join NASA’s elite corps of astronauts, contributing specialized skills acquired through advanced degrees in biology and engineering as well as extensive, branch-diverse military experience. They are all eligible to compete for a seat aboard NASA’s first manned mission to Mars, projected to launch in some 15 years. For more: Feminist Majority Foundation
Demand for women-only transportation soars in Jakarta: Jakarta is seeing a growing number of transportation services catering exclusively to women, offering better security and comfort when compared to packed public buses and trains in the Indonesian capital of 10 million people. Ladyjek and Sister Ojek, the most recent entrants to the female-only taxi services, have seen business take off less than four months after starting operations in the predominantly Muslim nation. Since its launch in October, the Ladyjek mobile app has been downloaded about 50,000 times and hundreds of Indonesians use its services each day. The company employs about 2,400 drivers, mostly housewives or students, and hopes to soon expand outside the capital. For more: Huffington Post
Acid attack survivor becomes model for Indian sari retailer:

Laxmi Saa, an Indian woman who survived an acid attack 10 years ago, is the new face of the Indian sari retailer Viva N Diva for a campaign called “Face of Courage.” Saa, who is now 26, was just 15 when she had acid thrown on her face by an older man whose marriage proposal she turned down. She told the BBC she’s thrilled to be a role model for others, and she’s also intent on sending a serious message to attackers. “This opportunity to represent an apparel brand was a platform for me to set an example for women like me to be confident and have courage despite their physical appearances,” Saa said. “This was also a platform for me to send a clear message to criminals that women will not lose courage even after they are attacked with acid to destroy their physical beauty.” For more: HuffPost

Election Updates:
Sixth Republican Debate highlights: Questions over Ted Cruz’s citizenship (and thus his eligibility for presidential office), immigration, and the rhetoric of Donald Trump (including the ambiguity of the phrase “New York values”) dominated the sixth Republican debate on January 14th. With the Iowa Caucus less than two weeks away, Republican “establishment” candidates are vying to capture more votes from the current frontrunners. However, Ted Cruz and Donald Trump are still dominating the Iowa polls at 25% and 22% respectively, followed by Marco Rubio at 12%, Ben Carson at 11%, and the other eight candidates trailing behind at 6% or lower. For more: NPR, Politico
Fourth Democratic Debate highlights: Hillary Clinton and Bernie Sanders began attacking one another’s positions more strongly than in previous debates, focusing especially on their disagreements with regard to gun control, healthcare, and Wall Street. Recent polls in Iowa show that Senator Sanders has gained significant ground in the past few weeks, now trailing Clinton by only 2%. For more: CBS, Politico