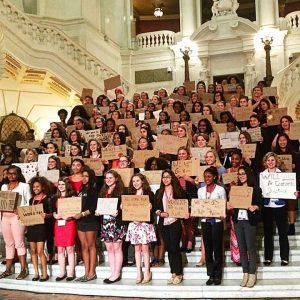 Last week, 100 GirlGov girls from Southwest PA were in the State Capitol to shadow legislators, lobby for comprehensive sex ed legislation, learn about civics and women’s history, become better advocates, and most of all — have fun! Click the social media links below to look back over some of the action:

WGF Instagram
GirlGov Instagram
In the News:
Next California senator guaranteed to be a woman of color: California Attorney General Kamala Harris and Rep. Loretta Sanchez came out on top in the primary for California’s open seat in the U.S. Senate, all but ensuring a woman of color will represent the Golden State in the upper chamber next year. Sanchez would be the first Latina in the Senate, while Harris would be the first black woman elected to the upper chamber in over two decades. Harris’ mother was from India, which means Harris would also be the first South Asian-American in the Senate. Either Sanchez or Harris would be the first woman of color to represent California in the Senate. November’s election will also mark the first time a Republican does not appear on the ballot for a statewide race. For more: Huffington Post
Pakistani women’s council fights against honor killings: In the Swat Valley of northern Pakistan — an area that was once a controlled by the Taliban — local resident Tabassum Adnan has formed the region’s first female “jirga.” A jirga is a form of village council, historically comprising solely men, whose word in some rural parts of Pakistan is tantamount to law. Adnan’s decision to set up the Khwendo Jirga, or “sisters’ council,” was revolutionary, but she said it had to be done to protect the region’s women. The council aims to fight against honor killings and child marriages, and has helped over 1,000 women and girls to date. For more: New York Times
Brazilians protest gender-based violence on Copacabana beach:

More than 400 pairs of red and stained white panties covered Copacabana beach in Rio de Janeiro as part of a nation-wide protest against gender-based violence. The protest comes after images of a 16-year-old girl who was reportedly raped by more than 30 men in a Rio favela circulated widely on social media. “We can’t tolerate abuse against women,” Rio de Paz, the NGO behind the Copacabana beach protest, posted on Facebook. The organization laid out 420 pairs of underwear because that’s the number of women who are raped every three days in Brazil, according to the pan-Latin American television network Telesur. For more: World Post
Jo Cox was advocating for Muslim women before her death: Recent evidence has emerged that Jo Cox, the MP who was killed outside her constituency office on Thursday, was working on a report about the increase in anti-Muslim attacks – particularly against women. “She met us to talk about how people could report attacks; particularly women in her constituency,” said Fiyaz Mughal, the founder and director of the Islamophobia watchdog Tell Mama. He continued: “We were hoping she would highlight the impact on Muslim women; particularly given the targeting [that exists]. The majority [of incidents] at street level were [on] women and she was going to raise that.” For more: The Guardian
Senate votes to require women to register for the draft: The United States Senate voted to pass a defense bill today that would require young women to sign up for a potential military draft for the first time in U.S. history. Republicans were divided about whether the U.S. should require women to register for the draft when they turn 18. Sen. Ted Cruz told Politico it was a “radical change that is attempting to be foisted on the American people,” while Sen. John McCain said “a large bipartisan majority on the Armed Services Committee agreed that there is simply no further justification to limit Selective Service registration to men.” For more: AP
Election Updates:
Hillary Clinton claims Democratic presidential nomination: After decisive victories in the California, New Jersey and New Mexico primaries two weeks ago, Hillary Clinton claimed the Democratic presidential nomination. In her speech, she appealed to supporters of Bernie Sanders to join her in the fight against presumptive Republican nominee Donald Trump. Trump, meanwhile, continued to inflict damage on his campaign following his criticism of a federal judge, Gonzalo P. Curiel, for the judge’s Mexican heritage. For more: New York Times
President Obama endorses Hillary Clinton: Following a meeting with Democratic presidential candidate Bernie Sanders, President Obama released a video on Facebook formally endorsing Hillary Clinton. “Look, I know how hard this job can be, that’s why I know Hillary will be so good at it,” Mr. Obama said in the video. “In fact, I don’t think there’s ever been anyone so qualified to hold this office. She’s got the courage, the compassion, and the heart to get the job done.” For more: New York Times
Feminist of the Week:

Emi Mahmoud is the poet who created the piece “Child Bride,” recently published to Button Poetry. In her poem, the Darfur-native tells a gut-wrenching story of a time she tried to speak to the bride at a wedding and realized she was a child bride. “She sat on a porcelain throne, beads and bows, holding plastic flowers on the arm rest,” Mahmoud says, referring to the bride. “How long have you known him,” she asks the young woman. “I don’t,” the bride responds. According to Unicef, more than 140 million girls will marry between 2011 and 2020. Mahmoud said that the bride was only 17 years old and had just graduated high school. No one even knew her name because she only spoke Arabic. Mahmoud won the 2016 Women of the World Poetry Slam this past March. To watch her performance: YouTube