The Supreme Court has overturned a Texas law which was predicted to close many clinics and further reduce availability of abortion in Texas. The 5-3 decision in Whole Women’s Health v. Hellerstedt Court reversed a ruling by the 5th U.S. Circuit Court of Appeals requiring clinics that provide abortions to have surgical facilities and doctors to have admitting privileges at a nearby hospital. This decision will have consequences around the country — several states have laws with similar requirements. If those laws are found to be essentially the same as Texas’ law, they will be thrown out by the courts. For more: NPR
NYC to provide free tampons and pads in public schools, prisons, and shelters: The New York City Council voted unanimously this week to fund the provision of menstrual supplies in all public schools, prisons, and homeless shelters. In some schools, girls have to wait for an overburdened nurse to give her a pad or tampon, sometimes missing class in the process. In others, girls must go through multiple school employees or sign a list explaining why they didn’t bring a pad or tampon to school. Current prison systems for tampons and pad distribution vary widely across states and facilities, but in many places, incarcerated women are given an insufficient monthly supply or must buy products with their own limited funds from the commissary. This clear-cut solution will help put pads and tampons where women and girls need them most. For more: Slate
Courageous Colombian activist confronts mining interests:

Three-time elected governor María Nidia Becerra Jacanamejoy has survived four direct attacks against her life, while working with indigenous leaders to achieve a five-fold expansion of their territory. In addition to these threats, Becerra has faced systemic sexism and racism. “It has not been easy to carry out an organizational process in this area, precisely because to enter as a woman and to take leadership in a difficult process, at a time when this is not seen as appropriate, reminds me that women are pushed to the fringes and are prevented from working independently,” she said. Becerra added that she sometimes had to take a submissive role in order to converse with other leaders, but that in general she feels that being a woman allows her greater access to perspectives that are often ignored — those of women and children. For more: New York Times
Black Girls Code moves into Google offices:

Black Girls Code will continue its mission inside its new 6,000 square foot home in Google’s New York office. Since 2011, Black Girls Code has worked to build awareness and enthusiasm about STEM careers among a group that is often overlooked. “This space will allow BGC to create and incubate programs for our tech divas in our office which will double as a teaching space for us,” said founder Kimberly Bryant. “And the proximity to Google’s headquarters provides countless opportunities for our girls to envision a future in tech- to touch it, feel it, experience it, and eventually be it.” Bryant describes the partnership as a “win-win” for both BGC and Google. While her organization receives access to more resources, the company gets a first look at diverse talent. “We’re building much more than just a pipeline,” says Bryant. “We’re creating future leaders for companies such as Google and providing with real access to an unrivaled pool of talent and creativity.” For more: For Harriet
Simone Biles breaks records, easily securing Olympic bid:

19-year-old gymnast Simone Biles easily secured her spot at the 2016 Rio de Janeiro Olympics this weekend. Landing atop the scoreboard at the World Gymnastics Championship in nearly every category including the balance beam, vault, and floor exercise for both days of the competition, Simone sailed through each round almost effortlessly to claim the overall win. Simone’s victory makes her the first woman to win four consecutive U.S. all-around titles in 42 years, according to Team USA. For more: Essence
Election Updates:
Clinton and Warren make first campaign appearance together:

Presumptive Democratic presidential nominee Hillary Clinton and U.S. Senator Elizabeth Warren of Massachusetts made history this week as they shared the stage at a campaign rally. There is much speculation about the probability of Warren and Clinton becoming the first all-female ticket for a major party, but Clinton said she is not yet prepared to announce her vice presidential pick. Overall, Clinton is solidifying her place as the presumptive nominee, especially following Bernie Sanders’s statement during an interview that he plans to vote for her in November. For more: New York Times
House Benghazi report finds no new evidence against Hillary Clinton: House Republicans released their long-awaited final report on the Benghazi hearings today, which included no new evidence against Democratic presidential nominee Hillary Clinton. The final report is a less damning indictment of Clinton than her supporters had anticipated. It includes no new evidence of wrongdoing by her, focusing more broadly on the Obama administration. For more: Los Angeles Times 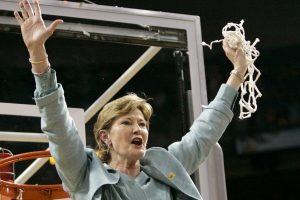 Pat Summitt, legendary women’s basketball coach, died today at age 64. Summitt built the University of Tennessee’s Lady Volunteers into a perennial power on the way to becoming the winningest coach in the history of major college basketball. In her four decades at Tennessee, Summitt won eight national titles and 1,098 games — the most by any Division 1 basketball coach, male or female.
Beyond the wins and statistics, she had a profound impact on women’s college athletics. When she became head coach of the Lady Vols at the age of 22, the NCAA did not even formally recognize women’s basketball. Summitt had to drive the team van to road games and wash the players’ jerseys herself. As the wins and the championships piled up, Summitt’s astonishing achievements commanded national attention and helped usher women’s basketball into the spotlight. During her 38 years as coach, 100% of Summitt’s players who completed their academic eligibility also graduated. In 2012, President Barack Obama awarded Summitt the Presidential Medal of Freedom. “When I think about my two daughters, who are tall and gifted, and knowing that because of folks like Coach Summitt they’re standing up straight and diving after loose balls and feeling confident and strong, then I understand that the impact that these people have extends beyond me,” Obama said at the ceremony. “It will continue for generations to come.” For more: CNN