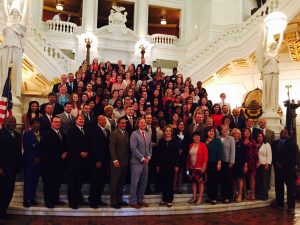 On Sunday, 100 GirlGov girls from Southwest PA will head to the State Capitol to shadow legislators, lobby for comprehensive sex ed legislation, learn about civics and women’s history, become better advocates, and most of all — have fun! Click the social media links below to follow our accounts and track the action:

WGF Instagram
GirlGov Instagram
In the News:
United State of Women Summit to be held on June 14:

This week, the White House released a video to publicize the upcoming United State of Women Summit. The Summit will focus on Economic Empowerment, Health & Wellness, Educational Opportunity, Violence Against Women, Entrepreneurship & Innovation, and Leadership & Civic Engagement. The pledge for the summit is: “I will: Be in charge of my own body. Every powerful part. Learn whatever I want like it’s nobody’s business. Stand by my game-changing ideas. Use my voice to stand up for my community. Get paid the same as everyone else doing the same job. Call out sexism when I see it. Not be a silent bystander. To learn more and find out how you can get involved, click here.
Sexual assault survivor’s statement goes viral: [Trigger warning] Amid public outcry over the light sentencing of Brock Turner, the Stanford swimmer who was accused of sexually assaulting an unconscious woman last year, the victim’s court statement has gone viral. Over 5 million people have read the young woman’s powerful words since they were released over the weekend, which has contributed to the proliferation of articles and social media discussions about rape culture and victim-blaming. To read the statement: Huffington Post
Women create multicultural haven for migrants in Greece:

Melissa, a new center for migrant women, is boldly located near a stronghold of a xenophobic group that is now Greece’s third-largest political party. The center, which opened last July, has become a sanctuary for migrant women at a time when Greece finds itself at a crossroads of crises: growing civil unrest over the country’s prolonged economic decline, an unstable government, and pressure from Europe to control the world’s largest refugee crisis since the second World War. “Migrant women experience double marginalization as women and migrants, but they’re agents of change,” cofounder Nadina Christopoulou says. “They’re integrators because of their children. They’re multipliers. For every tiny thing you give them, they multiply.” For more: New York Times

10 small businesses have banded together to start the movement #ClothesWithoutLimits to provide less-stereotypical clothing for young girls. “The awesome thing about working as a group is that it’s shown all of us — and our customers — how many different ways there are to ‘dress like a girl,'” Courtney Hartman, founder of Jessy & Jack and Free to Be Kids, said. Through the campaign, these women are hoping to not only bring attention to the negative impact that clothing with stereotypical messaging can have on girls, but more importantly, to show the positive impact that positive clothing can have. Malorie Catchpole of buddingSTEM explains, “When girls don’t see dinosaurs, space, and other science themes on their clothing, it tells them that things like science and engineering aren’t for them.” For more: Upworthy
Election Updates:
Associated Press announces that Hillary Clinton clinched nomination: A survey by The Associated Press announced that Democratic frontrunner Hillary Clinton has secured enough superdelegates to cross the delegate threshold and clinch the presidential nomination. However, six states — CA, MT, NJ, NM, ND, and SD — are set to vote in the final round of primary contests today. Bernie Sanders supporters hope that a big win for Sanders in the liberal stronghold of CA will lead to a contested convention in July. No matter the results of today’s primary contests, the rhetoric the Clinton camp chooses to employ later this week will be critical in determining the rest of the election season through November. For more: New York Times
Feminist of the Week: 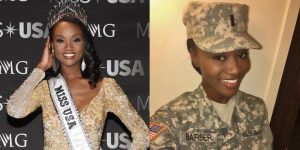 Miss District of Columbia took home the Miss USA crown this week for only the third time in the contest’s history, and Deshauna Barber takes great pride in breaking stereotypes. The 26-year-old is an Army Reserve officer and IT analyst for the U.S. Department of Commerce. Before the contest, Barber commented: “I’m being able to say that no one pageant girl does the same thing or has the same background, and I’m also saying that no one soldier has the same background and does the same thing…So there’s stereotypes on both sides that I feel like I’m breaking by even being here.” Barber was asked during the contest if the Pentagon was favoring “political correctness” over the military’s ability to perform at a high level as a result of the recent decision to integrate women into all branches. Barber responded:  “…We are just as tough as men. As a commander of my unit, I am powerful. I am dedicated. And it is important that we recognize that gender does not limit us in the United States Army.” For more: Washington Post