Calling all girls from Southwestern Pennsylvania entering 9th-12th grade! Applications are now open for GirlGov 2016! Go to GirlGov.org to apply by April 15th.

In the News:
First women candidates could begin SEAL training as early as August: Following the Pentagon’s announcement that all combat roles in the U.S. military branches will now be open to women, specific implementation plans have begun marking dates for women’s entry in the coming months. According to timelines released by the Department of Defense, the Marines will start sending women ground combat candidates to boot camp as early as April, and eligible women could begin the infamously tough Navy SEAL training by August. For more: San Diego Union-Tribune
Apple fares better than other tech companies for equal gender treatment: Following the launch of rankings in February by Fairygodboss, an online job review site, Apple has held onto its top position on the short list of tech companies whose employees report equal gender treatment. 72% of women respondents working at Apple reported being treated fairly. Coming second and third on the list: Google and Microsoft, with 59% and 58% respectively. In the tech industry, many companies have far to go to achieve a sense of gender equality among their employees. For more: Forbes
First all-women flight crew from Brunei lands where women can’t drive:

Late last month, captain Sharifah Czarena Surainy, senior first officer Dk Nadiah Pg Khashiem, and senior first officer Sariana Nordin made history when the trio became the first all-women flight crew to pilot an airliner for Royal Brunei Airlines. They landed the plane in Saudi Arabia — a country where women are restricted from driving — shining a spotlight on the struggle for gender equality in some parts of the Middle East. For more: New York Times

Male heads of state make sexist remarks in “celebration” of International Women’s Day: March 8 marked International Women’s Day, though certain male leaders around the globe celebrated by reinforcing gender stereotypes. Russian President Vladimir Putin praised women who “do everything on time and cope with a huge load of worries while looking tender, charming and amazing.” Turkish President Recep Tayyip Erdogan reminded his country that “a woman is above all a mother.” Despite room for improvement, last week included many beautiful celebrations around the world — read about some of them here.

Election Updates:
Mega Tuesday predictions: Today, voters in five key states will cast ballots in contests that might determine the course of the primary races for both major parties. Ohio and Florida are winner-take-all states for the Republicans, while the other contests award delegates proportionally. If John Kasich and Marco Rubio cannot pull out leads over Donald Trump in Ohio and Florida, respectively, their mathematical elimination could be imminent and Trump would have a strong chance of securing the Republican nomination.
On the Democratic side, surprise wins by Bernie Sanders following his upset in Michigan last week are the only way Sanders can maintain his “narrow path to victory.” No matter the results of today’s important contests, pundits believe no candidate on either side will be able to secure a nomination before June. For more: NPR
Protesters and Trump supporters clash at weekend rallies: Supporters and protesters of Republican candidate Donald Trump clashed at several campaign rallies over the weekend, resulting in verbal and physical altercations. Many critics have asserted that Trump is inciting violence, while his supporters point to protesters as the instigators. The Trump campaign canceled a rally in Chicago, citing alleged security concerns. Amid competing voices and criticisms, speculation remains as to how the violence on the campaign trail will affect the Mega Tuesday primaries. For more: The Economist


Feminist of the Week: 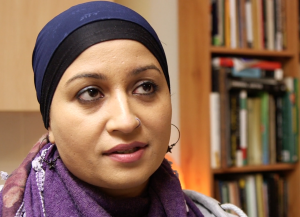 Yasmin Mulbocus, a former member of an extremist group, now runs a group called Muslim Active Women Around Hounslow and counsels girls in London away from joining extremist groups by trying to understand the problems they are experiencing in their own lives. Mulbocus says it was her own experience with sexual abuse and the foster care system that led her to seek out a group that accepted her and promised a better future. She now works with imams on ways to educate young women who seem to be having trouble fitting in or trouble at home.