Calling all girls from Southwestern Pennsylvania entering 9th-12th grade! Applications are now open for GirlGov 2016! Go to GirlGov.org to apply by April 29th.

In the News:
Hillary Clinton responds to critiques of “not smiling enough:” Democratic presidential candidate Hillary Clinton responded to critics who accused her of shouting at campaign events and not smiling enough after winning primary contests. “Let me say, I don’t hear anybody say that about men,” Clinton told CNN’s Anderson Cooper. “I’ve seen a lot of male candidates who don’t smile very much and who talk pretty loud. So I guess I’ll just leave it at that.” For more: HuffPost
Pink Brigade fights for women’s rights in rural India:

Sampat Pal, the self-styled commander of the Gulabi Gang, formed the women’s advocacy group over a decade ago and its network has swelled to over 400,000 women in rural India. “We are in the field every day to meet with women,” one member said. “If the police, for instance, does not listen to a woman we collectively go to the concerned police station and get her complaint lodged.” Another member explained that the women are there to help each other: “The benefit of joining is that if any of us is exploited we stand up for each other.” Renu Devi, a woman in her 30s, chimed in: “ I am here for my education. I learn about my rights here.” For more: New York Times
Multiple studies confirm persistent barriers for women scientists: Despite claims that women in science fields do not face significant barriers as compared to their male counterparts, implicit biases continue to obstruct women’s access and achievement. One recent study found that both male and female participants were twice as likely to select a man over a woman to complete a mathematical task, even when they had no evidence that the man would perform the task better. Another study found that both male and female undergraduates were more likely to explain a woman’s science-related setback than a man’s by appeal to factors about that person, rather than circumstances. Women with children additionally might suffer a “motherhood penalty,” with negative effects on income, career advancement, and perceived competence relative to both fathers and women without children. Finally, there has historically been a leaky pipeline, with women dropping out of science degrees and careers more often than men at every stage, as well as a glass ceiling, with barriers to advancement, recognition, and power at the top. For more: NPR
All-female cyclist group fights for mobility and access in LA:

A new documentary by directors Kate Trumbull-LaValle and Joanna Sokolowski, called Ovarian Psycos, tells the story of a collective of brown and black women who are “reclaiming the night, the streets, and cycling” in Los Angeles. Xela de la X, the group’s founder, says that bicycles are a practical mode of transport for working class women, but women of color are “brought up with a fear of movement and of the spaces we inhabit, a fear of navigating them.” For more: New York Times


Election Updates:
Mega Tuesday primary results: Donald Trump won big among Republicans during the important primary contests on March 16th. Marco Rubio ended his presidential bid after suffering a blow out in Florida, his home state. The only contest slowing Trump’s momentum was in Ohio, where John Kasich secured a victory. On the Democratic side, Hillary Clinton’s wins proved that her opponent’s victory in Michigan two weeks ago may have been a fluke. Though Bernie Sanders’s path to the nomination is increasingly narrow, the fairly even delegate split between the two candidates indicates the contest will likely persist until June. For more: The Atlantic
Ipsos/Reuters poll respondents favor Trump and Sanders: The latest Ipsos/Reuters poll, conducted March 10-14, found that 26% of respondents would trust Donald Trump as Commander in Chief, while 31% would trust Hillary Clinton and 38% would trust Bernie Sanders. Ted Cruz and John Kasich trailed behind at 20% and 19%, respectively. Other polls reveal higher favor for Hillary Clinton among Democrats, and even stronger support of Trump among Republicans. Three more states vote today, March 22, which could be important in an increasingly volatile presidential race. For more: New York Times
Pennsylvania voter registration deadline approaching: The deadline to register to vote in the Pennsylvania primary is March 29th. Click here for registration and more information.


Feminist of the Week: 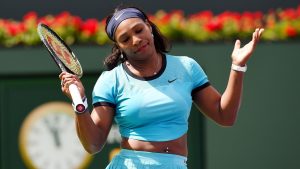 Tennis star Serena Williams sharply criticized sexist comments made by Indian Wells CEO Raymond Moore this week. Moore, a tennis tournament director, unleashed a slew of sexist statements including: “They [women] are very, very lucky. If I was a lady player, I’d go down every night on my knees and thank God that Roger Federer and Rafa Nadal were born, because they’ve carried this sport.” Williams refreshed Moore on recent history in the world of tennis, saying “I’m still surprised, especially with me and Venus and all the other women on the tour that’s done well. Last year, the women’s final at the U.S. Open sold out well before the men. I’m sorry, did Roger play in that final, or Rafa or any man play in that final that was sold out before the men’s final? I think not.” For more: NPR