Feminist Update
Your weekly update on all things feminism. Keep up to date on the election, the news, and what is going on in the world of women.
In the News:
Zika crisis reignites debate about foreign aid for abortion clinics: As the Zika virus continues to spread throughout Latin America, U.S. policymakers have been forced to revisit the decades-old question of whether to lift the ban on foreign aid for abortion clinics. The virus has been directly linked to a birth defect that results in an abnormally small head and brain damage. Those who oppose the current policy argue that USAID funding of abortions could help provide access to safe procedures for pregnant women who are affected by the virus and who might choose to terminate their pregnancy. For more: NPR
Centenarian sets world record: 100-year-old Ida Keeling set a new world record for the 100-meter dash at the Penn Relays in Philadelphia last weekend. She ran the race in 1 minute and 17.33 seconds, the fastest time ever recorded for a centenarian. Runners World commented: “Ida Keeling smiled and celebrated by performing five pushups on the infield after Saturday’s race, though she may not have been able to hear all the cheering from the 34,000 in attendance. Her daughter had taken out one of her hearing aids to prevent Ida from becoming distracted by the noise.” For more and to watch the race: NPR
Paid family leave remains a salient issue, but not a campaign topic: Paid family leave is now a frequent topic of conversation as it has become clear that the need to take time off for births, sick relatives, injuries, etc. poses serious financial burdens to countless American families each year. A poll taken earlier this year for the National Partnership for Women and Families found 76 percent of likely 2016 voters say they favor the creation of a federal fund for paid family and medical leave. However, it still doesn’t rank on lists of top issues weighing on the minds of voters. For more: NPR
Detroit all-girls team wins top prize at prestigious chess competition: A group of eighth-grade girls from Detroit, Michigan took home the top prize from a national chess tournament this week. Led by 13-year-old Jada Hamilton, the five-member University Prep Science and Math team earned first place in the “Under 14” category at the 13th annual KCF All-Girls National Championships in Chicago. “We always tell them, every place they go, they represent Detroit,” assistant coach Kwabena Shabu said. “It’s a wonderful showing.” For more: Huffington Post

Ballerina Misty Copeland immortalized with her own Barbie:

Following the reveal of its new multiple-size Barbie line, Mattel released a Misty Copeland doll to honor the first-African American woman to be named principal dancer at the American Ballet Theatre. “I was hands on with making sure that she really looked like a dancer and looked like me,” Copeland said. For more: PBS

Election Updates:
“Acela Primary” results and this week’s contests: Pennsylvania, Connecticut, Delaware, Rhode Island, an Maryland headed to the polls last week, resulting in a clean sweep for Donald Trump and a solid victory for Hillary Clinton. Another decisive contest will be today’s Indiana primary, which will likely help both these candidates move closer to securing their increasingly inevitable positions as the party nominees. For more: NPR
Ted Cruz names Carly Fiorina as running mate: In a relatively unprecedented move, Republican candidate Ted Cruz named former rival Carly Fiorina as his pick for Vice President. This is part of a last-ditch effort to regain momentum after being mathematically eliminated from securing the nomination last week. So far, it is not clear that Fiorina can help slow the momentum of Donald Trump’s ahead of today’s Indiana primary. For more: CNN
Feminists of the Week: 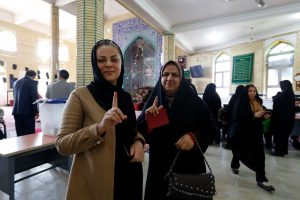 A record 17 women were elected to Iran’s Parliament over the weekend after a run-off election — the highest number of women elected since the 1979 Islamic revolution. Women now make up 6 percent of the new cohort of 290 MPs, a feat for which Rouhani congratulated voters, saying: “People chose the best candidates in the 26 February and 29 April elections.” For the first time, there will be more women than religious leaders in Parliament. For more: BBC