This week WGF showed its support during the #FightFor15. The Fight for a $15 minimum wage is a fight for everyone. When workers make $15 per hour and have a union, families and communities become stronger. This is why workers all over the country have been standing up and demanding fair wages, a voice at work, and an economy that works for everyone.

The deadline to join the Host Committee for the 2016 Crossroads Conference for Women has been extended to Monday, November 30th, with a donation of $500. You’ll receive two tickets to the event; written recognition as a Host Committee member at the event via video display, conference app, and website; and VIP seating in the ballroom for the Keynote Luncheon.

In the News:
I’m a feminist but I’m not a…: It’s time to clear up a few stereotypes about feminists. In a video from BuzzFeed Yellow, a diverse group of feminists backed the gender equality movement while also dispelling some of the myths associated with it, including its supporters being “sexist.”
Victoria’s Secret Model Shut Down A Sexist Question: When a TMZ reporter gained behind-the-scenes access to a Victoria’s Secret fashion show, Magdalena Frackowiak, one of the models, was unimpressed with the reporters “sexist” questions. Her response reminded TMZ to #AskHerMore.
Changing the Dialogue for Women Vets: “Women are under a microscope while we serve, and when we come out we are ignored.” The stories of female veterans don’t always get traction. In recent years, awareness of concerns like Military Sexual Trauma (MST) have received more recognition, particularly through the documentary The Invisible War. Read more: Huffington Post
Election Updates:
Election 2016, One Year Away: “One year from the 2016 presidential election, Hillary Clinton has reasserted herself as the dominant candidate for the Democratic nomination but still shoulders considerable vulnerabilities that don’t appear to be receding.” Read more: U.S. News & World Report
Hillary Clinton proposes $30bn lifeline for hard-hit coal communities: “Hillary Clinton proposes $30bn lifeline for hard-hit coal communities. After setting ambitious goals to combat climate change in recent months, the Democratic presidential frontrunner’s latest proposals detail how a Clinton administration would seek to alleviate the impact on mining communities of a transition away from coal-fired power plants.”
Feminist of the Week: 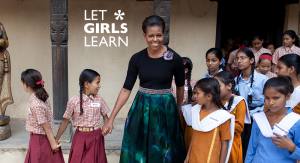 Michelle Obama, who is currently trying to close the higher-education gap among minority and low-income Americans, has been recently speaking out about girls’ education around the world. “Let Girls Learn” is an initiative that will increase funding for girls’ education in existing U.S. investments in primary education. Obama will partner with the Peace Corps to recruit and train an additional 650 volunteers to work with communities to increase girls’ access to education.