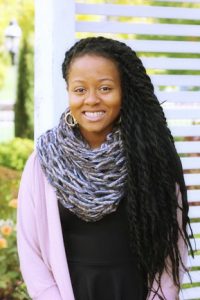 Meet the summer interns at the Women and Girls Foundation! We have some amazing women working here this summer – read on to find out more about our Writing Intern Alexis Payne.

WGF: How did you get started with the Women and Girls Foundation?
AP: After taking Civics in my freshman year in high school, I was really interested in government, politics and the affect it has on the daily lives of American citizens. My best friend and I decided to go to GirlGov in the summer after my Freshman year because we were both interested in studying government at the state congressional level. Shadowing a state legislator sounded like an incredible opportunity and we jumped to get spots on the GirlGov bus to Harrisburg. That was the first of many experiences with WGF.

WGF: Tell us about your background in social activism.
AP: When I was really young my Dad made sure I knew about the history of Black people in the United States. Growing up, I watched a lot of movies and I read a lot of books about the civil rights movement and slavery. I read all of the American Girl “Addy” books and I believed in a rather simplified story regarding the “liberation” of Black people in this country. I thought, from the things I had read and been taught, that we had once been oppressed and that in 1865 we had gained emancipation and been freed. I believed that our oppression ended indefinitely with the Civil Rights Act of 1964 and that that act protected us from all of the discrimination our country once participated in.
As I grew older, I discovered that the story was much more complicated. I learned that racism has been deeply rooted in the story of our country since its inception. I learned that its implications are far-reaching and dynamic and that oppression on American Blacks hardly ended with emancipation or with civil rights.  My interest in social activism grew from my awakening to these ideas. It expanded when I was high school, when I was made aware of intersectionality. I discovered that oppression is not one-fold or single dimensional. I discovered that oppression is nuanced and complicated—operating out of race, gender and class to create a society geared towards benefiting and empowering certain groups of people.

WGF: At what moment did you realize you wanted to get involved in activism?
AP: I think it all comes back to that Civics class I took in my freshmen year of high school. My teacher really inspired me to get involved and be a change agent in my community.

WGF: What are some of the initiatives that you started at CAPA?
AP: During my senior year at CAPA I acted as President of the Black Student Union and started a lot of new initiatives within the organization. We aimed to create productive conversation through a lot of different mediums—we watched movies, had discussions, facilitated lessons, planned demonstrations and acted as mentors. We planned a protest regarding education—the absence of a comprehensive Black history curriculum, and the lack of diversity amongst teaching staff in our district’s schools. The BSU was probably the most significant initiative I participated in at CAPA. It helped in the empowerment of student voice throughout my school and provided opportunities for student leadership as I move on to the next step in my future.

WGF: What are you working on for WGF?
AP: This summer, I am working as the writing intern for WGF. I am preparing a White Paper Report regarding Heather’s sabbatical in 2013 and I am working on WGF’s Annual Report.

WGF: What is the most rewarding initiative you have pursued in your social activism career so far?
AP: I think the most personally rewarding social justice initiative I have pursued has been as a literary artist.  I think that art is one of the most powerful means by which change can be affected.  Having opportunities to use my words in poetry and plays to affect social change has been incredible. It is has affirmed that my voice has power and that I can have an affect on the world around me.

WGF: If you could resolve one issue in the world, what would it be?
AP: I think I would make “education” accessible for everyone in the world. I think education is the first step to create a more productive and aware world with citizens who are conscious of the ways in which society works and utilizes their existence. (“Education” to me does not mean the “common-core” standardized definition that Western culture has shaped it to be. It breathes and exists beyond that as a thing that can inspire, provoke and create engaged world citizens. )

WGF: Do you have advice for young people who want to make change but don’t know where to start?
AP: Start now! Don’t hesitate. Your voice matters. Never let anyone tell you anything different.

WGF: What are your plans for the future? Are politics and social activism on the table?
AP: In the fall I will be attending Yale University. I’m not entirely sure what I want to major in yet but I am considering English, African-American Studies, American Studies, and History (I’m kind of all over the place).  I want to open a theater company one day and I definitely don’t want to stop writing. I’ve also considered being a lawyer or a professor. I have a lot of different versions of the future in my mind and I’m not quite sure which one I want yet. Regardless though, social activism is definitely going to be a part of it.

WGF: What is your favorite food?
AP: Sushi.