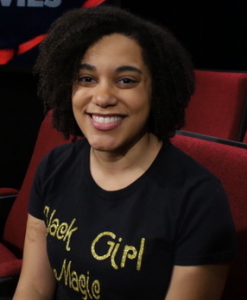 Moiya McTier has spent a lot of her life thinking like a scientist – she’s currently an Astronomy PhD student at Columbia, was the first person to study both Astronomy and Folklore & Mythology at Harvard, and says that her mom was grooming her to be a scientist from day one – and she wants to help you learn to think like a scientist too.

Moiya was a GirlGover with WGF in 2011, which she credits as her first professional experience, where she learned how to be comfortable talking to really intimidating people. Her advocacy focus back then was environmental justice, and she carried her activism through into her senior honors thesis – a science fiction novel set on a planet that she studied that she calls “an allegory for the Hawaiian sovereignty movement.”

She’s currently working on starting a consulting start-up called Pendulum, that would take skills that she’s learned from working in astronomy – skills she believes are essential to everyone – and would work to teach businesses and employees how to shift their mental framework and use these skills to think like scientists in their places of work.

WGF caught up with Moiya to learn more about her start-up and her journey.

“When I was given my first astronomy lab to teach, I realized quickly that all of these students are not astronomy majors, and most of them are humanities students. Doing tough derivations and putting variables into a black box of code are useful skills if you’re going to be a astronomer, but why would that be important to you if you’re going into the humanities?” she asked. “I decided to approach my lab from a skills based perspective, where every session was devoted to practicing a certain skill. I made sure that all the skills were widely applicable so everyone could benefit from them – there are skills like dimensional analysis, back of the envelope calculations, or intuiting equations. Those are the explicit skills,  but underneath them are the other skills, like mental multitasking, or interpreting data, or communication.”

Moiya’s story is that of planting herself directly in the intersection between science and the humanities, and learning “how to combine both of [her] degrees to become an effective science communicator.” She says, “one of the best ways to teach people science is by doing it with a story, because then it’s easier to remember.”

But it wasn’t always easy. “I had to fight to double major in Astronomy and Folklore and Myth,” she said. “Eventually I pointed out that neither of the departments were big enough to stand losing people and they let me do it.”

She also talks about how astronomy was hard because she didn’t have a strong background in physics or math from her high school days, and how finding the right tone in her mythology papers was difficult because she felt like she had interesting things to say but didn’t quite know how to phrase it correctly. But, she says, “it was a really nice balance,” to have a mix of classes where assignments were problem sets and classes where assignments were all reading, that many  of her peers didn’t have. She also lives the value of doing both every day. She’s learned to take the varied languages and ways of thinking between science and the humanities and be able to navigate between them and across them, and this is exactly what she hopes to teach others how to do with Pendulum.

So how can you help her new initiative? Moiya’s put together a needs assessment survey, and wants your input on what skills companies use and might be looking for. The plan is to start with companies first – go in and teach employees how to think like scientists. Eventually, thinking back to her experience with GirlGov, she’d like to expand to working with government officials, such as campaigns, aspiring politicians, or college government classes. With the gap between policy makers and policy – especially in the STEM fields – being so huge, this is an invaluable opportunity.

She’s looking for input from every sector and every industry right now, and it only takes a minute to complete!

What’s next for Moiya? Well, after falling in love with space and the scientific process, and asking questions and figuring out how to find the answers to them, she “still feels like [she] has questions about space, and [isn’t] done learning.” Whether it’s publishing her science fiction novel she’s slowly been working on, her work with Pendulum, or her research as a astronomer, Moiya is a GirlGover on the rise – and we can’t wait to see where she soars to next!